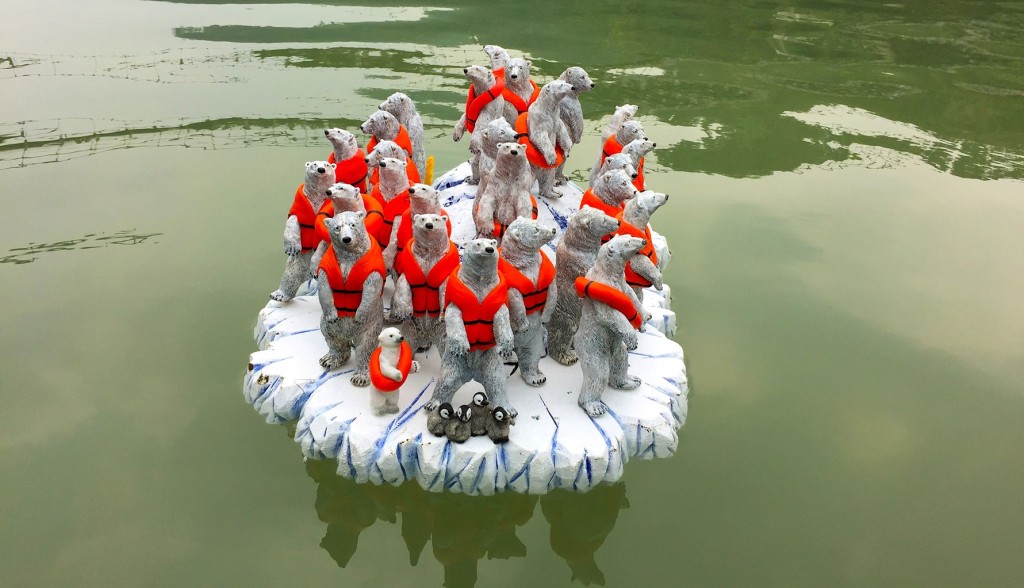 As European governments rapidly turn their attention to the implementation of the EU-Turkey agreement, and the return and resettlement of refugees to Turkey has begun, the first global animal refugees arrive in Sweden.

A spectacular scene is taking place on the shores of Lake Mälaren at Sigtuna, close to the capital of Sweden – Stockholm. Around 35 animals suffering from climate change, including polar bears and penguins, have arrived with a “hearts and borders” plea to the Swedish government.

Polar bears spoke about their tragic future. Climate change has made it hard for them to find a single seal for several months in a row. Having to swim up to 400 miles without stopping, in search of ice floes that have not melted, is not uncommon. Some polar bears have even had to eat their cubs.

These victimized animals criticize human beings for putting the ecological system on Earth out of balance. They also warn about the global CO2 in the atmosphere already having risen above 400ppm, and that humankind is always just “talking” and not taking necessary actions. They also question if many nations actually can achieve their INDCs (Intended Nationally Determined

Contributions) in the Paris agreement. Penguins also spoke about that it’s not only a matter of their own survival. Humans living on lands such as the iconic victim island nation Tuvalu, located in the south Pacific, with traditional lifestyles, in harmony with nature, without the luxuries and burdens of modern civilization, and almost zero carbon emissions, are now facing a zero survival future. The global human community seem to not care or be concerned that once Tuvalu is underwater, most of the coastline cities worlwide will also be facing the same crisis. One of the penguins that arrived in Sigtuna was also a participant in the UN climate meeting COP18 in Doha, by invitation from the Taiwanese artist Vincent J.F. Huang as an “animal delegate”.

The global animal refugees emphasized that Sweden has had an open and inclusive international image for accepting refugees in the past. They had also heard about the Climate Existence Conference taking place in Sigtuna between April 6 and April 8, especially focused on questions of human lifestyles, worldviews and relationships with the more-than-human world, in response to climate change. The animal refugees hope to join the conversations and events at the conference this week.

Although registration for the conference has closed, the conference organizers CEMUS and The Sigtuna Foundation confirm that the animal refugees will be allowed to participate.

Humans who have missed to register can still join two open lectures with the Archbishop at the Church of Sweden and Swedish minister of International Development Cooperation: